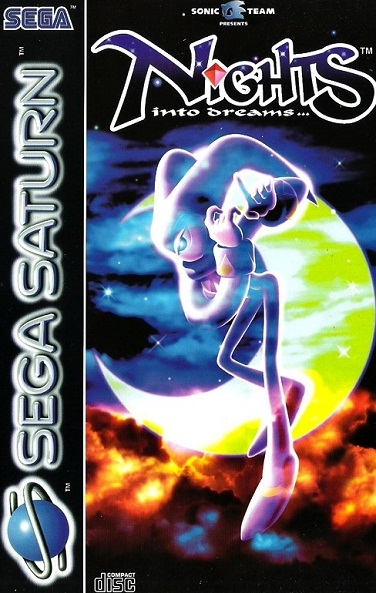 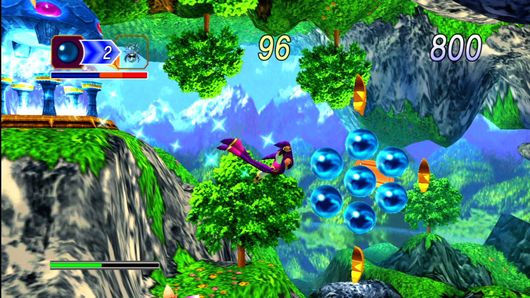 The year is 1995, and Sega, one of the leading games companies of the world, has a new games console out, the Sega Saturn. The Mega Drive (known as Genesis in North America) was a huge success for Sega and the company was constantly at war with Nintendo during the 16 bit period. The one explosive piece of ammo Sega had against Nintendo, was the novelty of their company mascot, Sonic the Hedgehog. Sonic was cool, he had attitude and he had speed that left Nintendo’s Mario looking like a tired old OAP in comparison. Not only was Sonic’s image right, Sega had also created some of the best and most innovative platformers of the 90s in the form of the Sonic franchise. Now you’re probably reading this and wondering what this has to do with NiGHTS or the Sega Saturn. Well fast forward to 1996, and Sega the once great company is trailing far behind in the 32 bit console war, facing stiff competition from a new console on the scene, the Sony Playstation. There are a lot of reasons behind the Saturn’s failure, but one of the biggest and most bizarre mistakes Sega made was not capitalising on the huge success of Sonic the Hedgehog. The Sega Saturn never had a true Sonic the Hedgehog game and this had a huge effect on the success of the console. However, you can forget all about Sonic the Hedgehog…

Because out of the shadows, entered NiGHTS into Dreams, possibly THE game everyone associates with the Sega Saturn. Not only was this game made by the Sonic Team, but I’m tempted to say it more than makes up for the absence of the blue spiky hedgehog. Like Sonic, NiGHTS is a game that contains a lot of speed and fast paced gameplay. Whilst there are some similarities between the two games, NiGHTS is an entirely different beast. NiGHTS offers something genuinely different and original that hadn’t been experienced in games before, and even now in 2010 I don’t think there’s any games quite like NiGHTS.

NiGHTS is a truly odd game, to say the least. Personally, I never really quite understood the story behind the game, but, luckily, the story is not a large part of what makes this game so good. This is one game that is all about the gameplay. The game’s story follows two children entering a dream world, where they are then assisted by the main character, NiGHTS. That really is all you need to know though.

For me, NiGHTS represents a game that truly is timeless and still stands up well today. The problem with the 32/64 bit era was 3D polygons were still a relatively new concept and developers felt forced into creating 3D games in order for them to sell. This left a lot stinkers and games that have not aged terribly well. Whereas 3D platformers were becoming incredibly popular during this period, Sega struggled with creating a good game in this genre. With NiGHTS, Sega created a game with the speed of Sonic, but instead of platforming, flight was the central aspect of the gameplay. This was achieved using fluid gameplay and the use of a ‘3D controller’ with an analogue stick, created with NiGHTS’ gameplay in mind. If you want to get the most out of this game, I advice you make sure you pick up the 3D controller.

During the game, the player must fly through loops, collecting stars and blue orbs, all whilst trying to create the longest ‘links’ in order to get the highest score. The primary goal is to collect as many blue orbs as possible and to submit them into a blue globe that can be found in one part of each route in a level. Once enough blue orbs have been deposited a new route will begin. There are 4 routes on each level and then the player must face a boss.

NiGHTS takes place in 3D worlds, but the majority of the gameplay is placed in linear ‘2D’ routes in which the player flies through (mostly from left to right like platformers). Although the game is in 3D, the gameplay is not entirely as the player is restricted to only being able to fly in the 2D plane of the level, with the camera angle dictating the player’s actual motion. Although some criticised NiGHTS at the time for not being a full 3D game, this is actually one of the strengths of the game in my opinion. Instead of forcing 3D gameplay down people’s throats, Sega have created something that feels far more natural and organic of a progression from the 16 bit era.

The game is split into 2 sides, with each using different characters, Claris and Elliot. Both contain 4 different levels, with an 8 in total (or 7 as the last level for both characters is technically the same). The levels are absolutely fantastic and NiGHTS really excels with its creative level design. During NiGHTS you will be flying in icy mountains, lush valleys, and gorgeous hills just for example. The graphics are really vibrant, bright and all round some of the best 3D graphics the Saturn has to offer. Sega’s creativity also reaches a great standard in regards to the level bosses. Not only are they great to look at, but they’re all different and require some thought to finish them.

NiGHTS is far from being perfect, but there is a lot of original and great gameplay that makes this an essential purchase for any Saturn owner. The game is very short and not too hard, but it’s great fun, so there’s no reason why you won’t come back to it. The real longevity in this game is the high scores system and always trying to beat your scores. The game is a lot of fun, and the short length is only a minor drawback in my opinion, as the game doesn’t really require great length to it. In the case of NiGHTS, it’s more about quality than quantity.