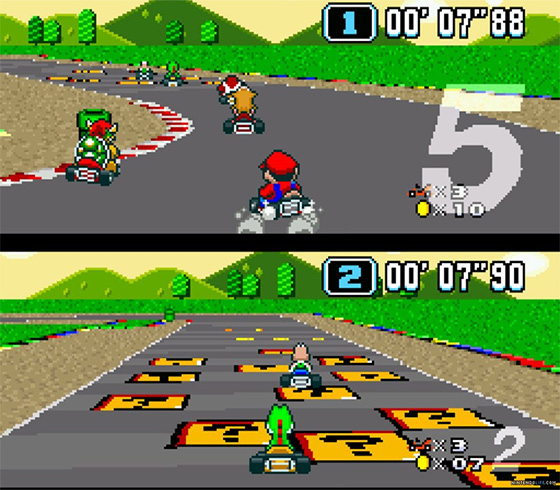 Who would have thought, all the way back in the early 90s, Nintendo would release a racing game based on the Mario franchise, that would go on to become, not just a fantastic racing series, but also the greatest multiplayer game series of all time?

And yet, despite the fact that, at the time of writing, Super Mario Kart has spawned 7 sequels (some on handheld consoles), with Mario Kart 8 in many ways being the absolute pinnacle of the series, there’s still something about the first game that has yet to be beaten.

Maybe it’s nostalgia, maybe it’s’ rose-tinted glasses, but the fact is Super Mario Kart plays a lot differently to its successors. In many ways, better, less gimmicky and with much tighter controls. The tactics in Super Mario Kart differ slightly from the newer Mario Kart games, with there being an emphasis on more skillful driving, collecting coins to increase your speed (these were removed from later games, but made a return in Mario Kart 8) and it’s this that makes it so fun to play.

Whilst it’s easy to take Mario Kart for granted now (with all the clones and sequels that followed the original), it’s worth remembering just how innovative and and inspired it was to take the characters from the Super Mario universe and place them into go karts, along with plenty of weapons to use. It’s such a simple concept and yet, it was something that had yet to be explored.

Super Mario Kart did everything so beautifully well, but it does have a few minor faults (which aren’t found in later entries in the series). For one thing, even when playing the game in single player mode, you will be stuck in a constant split-screen (with the map taking the place of the lower half of the screen. There was probably a reason for this, but it certainly can be a little irritating. The other issue, although this is very small, considering the time it was released in, is that the game cannot be played with more than two players.

So overall, whilst the future Mario Kart installments have increased their focus more and more on, gimmicky weapons, crazy routes, more characters and different vehicles, the SNES original is well worth returning to, in order to experience a far more balanced and simpler game. And that’s not to rubbish the other Mario Kart games, as they all have strengths and weaknesses, it’s just Super Mario Kart really offers something different, by emphasising, instead, the actual racing instead of firing a constant barrage of ridiculous weapons. It’s definitely worth playing the original to see how the series has developed and changed since.