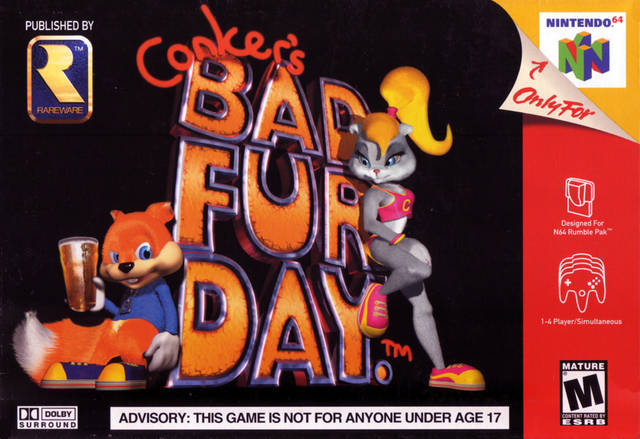 Until Conker’s Bad Fur day was released, I didn’t think there was such a thing as a truly hilarious and comically well scripted video game. Then Conker’s Bad Fur Day came out, hot off the heels of the television show, South Park, which was increasingly gaining popularity, and just completely tore up the rule book.

It’s not all just jokes though, the story is genuinely really funny, but the gameplay also shines. Conker’s Bad Fur Day is a 3D platformer, but it plays very differently to games like Mario 64 and Banjo Kazooie. It has a little more focus on the story and plays more like an adventure game, due to the game being void of item collecting.

Conker’s Bad Fur Day utilises an interesting controls style that employs the traditional, standard jump and attack buttons, but adds in what it calls the “Context Sensitive” button (usually B button), which triggers exactly what Conker needs at that moment in time.

The story centres around an evil king, upset that his milk spills off his wonky table, who seeks to kidnap Conker in order to use him as a table leg. It’s bizarre and hilarious, with Conker beginning his quest lost and hungover, after a night out getting drunk. Some of the best parts of the game though, are when they decide to spoof some famous films, such as The Matrix, Alien, A Clockwork Orange, Saving Private Ryan and many more.

This is also one game that demonstrates why Rare were masters of their craft back in the era of the N64. The graphics, music and sound are absolutely incredible, especially when you consider Rare had to squeeze it all onto a small N64 cartridge. Conker’s Bad Fur Day proves to be one of the N64’s most impressive titles.

So while some (admittedly, not many) might try to disregard Conker’s Bad Fur Day as just a series of crude jokes, it’s still an incredibly deep and enjoyable game, but in addition, it is actually very witty, creative and undoubtedly intelligent. This is one of the best games on the N64, not just in terms of its gameplay, but also its audio, graphics and overall presentation.