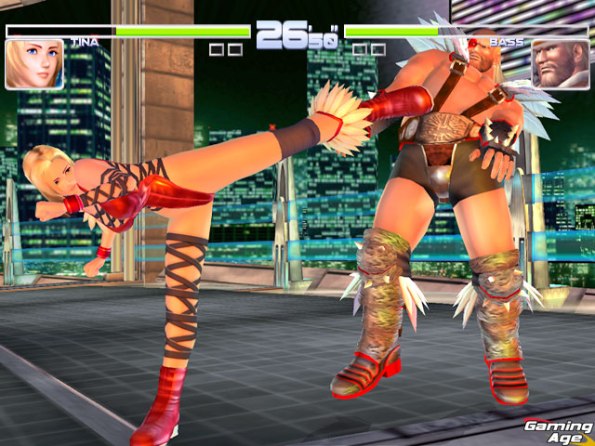 Dreamcast fighting fans were spoilt for choice back in the console’s hey day, but one fighter that does stand out for trying a few things different, is Dead or Alive 2.

Featuring multi-tiered stages, with interactive components, gorgeous graphics, an accessible fighting system and the option for tag team battles (great for 4 player action), Dead or Alive 2 did plenty to offer something new to fans. There was also super bouncy breast physics that appealed to the teenage male audience in ways they would never admit.

Although there have been numerous entries in the series since DOA2, including about 400 different releases of DOA5, I still find myself coming back to DOA2, as it has the most fun gameplay and best stages (in my opinion).

The most original part of Dead or Alive 2, apart from the multi-tiered, interactive stages, is the tag-team mode, in my opinion. It was really cool that 4 players could play together in a fighting game and that you could team up co-operatively. It was also really fun playing solo, pulling off team attacks and pummeling your opponents.

The story mode is fun in DOA2. There’s lots of beautiful cutscenes and gorgeous graphics. Story-wise, I have no fucking idea what’s going on, but it looks and plays amazingly well. Each time you play through with a character, you unlock a new costume, which oddly enough, for the women, is usually an even skimpier and racy outfit. God, the 14/15 year old me loved this game.

Pro tip: If you want to play the Dreamcast version (which is superior to the PS2 version in every way imaginable, with exception to content), import the limited edition, released exclusively in Japan, as it’s the best version, due to added characters, stages and costumes. Alternatively, there was a remake on the Xbox, although I can’t say I’ve ever played it.