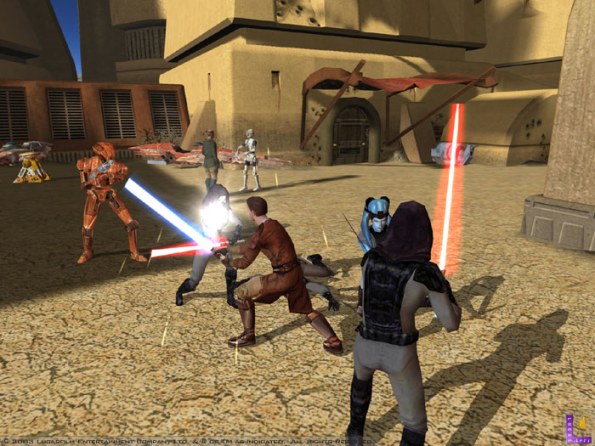 For Star Wars fans, RPG fans and gamers in general, it simply did not get any better than Knights of the Old Republic. Set thousands of years before the movies, KOTOR is a sensational adventure that has influenced numerous role-playing games that have followed since.

KOTOR was a hugely refreshing game and possibly the best example of a game that has made use of a movie series’ licence ever. KOTOR not only avoided abusing the licence, but actually excelled in as many ways that are possible with a video game. The characters were compelling and the story was incredible, with twists and turns that keep the player glued to the screen. In fact, if the truth be told, the storytelling is truly exceptional and frankly, the story is vastly superior to the poor prequel films that were out around the time of KOTOR’s release.

Before KOTOR, I had never felt so in control and involved with a video game. Where KOTOR really excels, is with the choice it hands to players. Each time you strike up a conversation, you have a choice of what you can say from a variety of options. What you say or choose to do has a direct impact on characters, the story and universe as you move through the game. It also affects your affiliation with either the light or dark side. Initially, whether you are closer to the light or dark side affected the jedi powers you can learn, but eventually it becomes an integral part of the story as you get closer towards the end.

KOTOR successfully allows the player to become engaged in a game that is far more than merely just any old free-roaming adventure RPG. This is a game, perhaps the first and only, that lets you become fully immersed in the Star Wars universe, with the ability to make real, meaningful choices, travel across the galaxy and unfold one of the greatest original stories told in the Star Wars franchise, outside of the main films, that eventually culminates in one of the best gaming plot twists of all time (if you’ve played this before, you know exactly what I mean).

Now that you can play this on tablets, there’s really no excuse not to play the greatest Star Wars game ever. Do yourself a favour, if you’ve never played it, pick it up now!