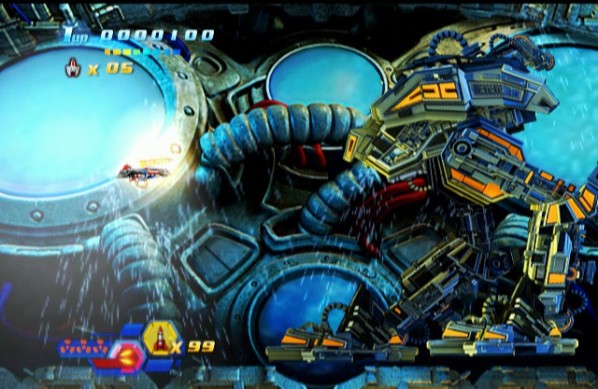 Yet again, another game released long after the death of the console that just doesn’t seem to want to ever truly die, Sturmwind is yet another shooter (or shoot ’em up/shmup, depending on what title you prefer), released in 2013.

Using a hybrid of two-dimensional and three-dimensional designs, Sturmwind is a visually stunning, addictive game, with 16 levels and hundreds of different enemies. Looking more like a 360 or PS3 Indie title, Sturmwind is possibly the most beautiful independently released games on the Sega Dreamcast. It even has ‘achievements’, like PS3 and 360 games, so the effort by the developers, Redspotgames, have put into the presentation has been top notch.

The best thing about Sturmwind, though, is that unlike a lot of shmups, it saves your progress and you can continue from any level completed, so that people like me who suck can experience the game far more easily. There is also the Arcade mode though, that does not offer this service. This makes the game accessible to both new audiences and the hardcore shooter fans.

There’s lots of awesome power ups, you can charge your shots, there are bombs you can collect, you can choose to alternate your shots from behind you and in front of you and there are some gorgeous insane bosses to fight. There is plenty of depth and the game is incredibly well made.

Perhaps my favourite mechanic in Sturmwind though, is how lives and power ups work in this game. Every now and again, when you kill an enemy, it will leave a power up behind that will float across the screen, altering between different weapons. If you successfully grab it, you’ll gain a new weapon. If you grab a a power up for a weapon you already have in your possession, it will simply become more powerful. Now, in terms of lives, Sturmwind doesn’t use a life system. Instead, if you are hit, you will simply lose your current weapon and revert back to your previous weapon. Keep on grabbing power-ups and you’ll be okay, but get hit too many times and you’ll die. It’s a unique system and works really well.

It’s a shame there isn’t a 2 player mode, but otherwise Sturmwind is one hell of a game. There are 7 different worlds and multiple levels to keep you occupied for a long time.