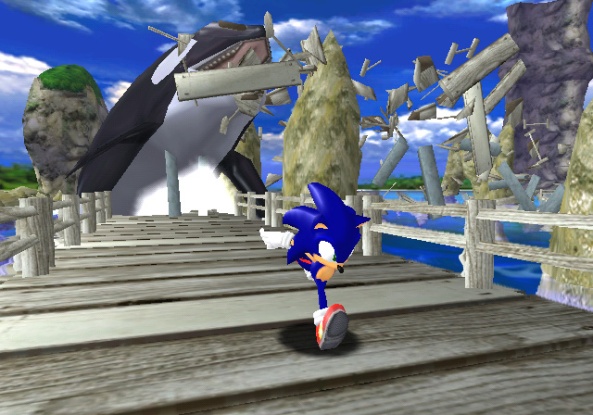 Whilst Nintendo managed to transition Mario into the third-dimension (and boy did they do it well), Sonic’s journey from the 16-bit era of two-dimensional side-scrolling platforming, to the big open third-dimensional world, was far more bumpy.

First, there was Sonic 3D Blast, a quasi-3D isometric game that sapped all of the speed and fun out of Sonic. Then the Sega Saturn failed to release a true new-gen Sonic game (the long hyped Sonic Xtreme was in development hell and was eventually scrapped), instead relying on a short 3D mini-game as part of Sonic Jam (a compilation of the first four Sonic games) and the mediocre Sonic R (a racing game) to showcase Sonic in 3D. It was a difficult time and it looked like Sonic (and Sega) may never bounce back.

Fortunately, with the Sega Dreamcast, Sega looked to right a lot of their wrongs and, in many ways, they really did. First on their agenda was ensuring that Sonic would be back and ready for the launch of their new system. This was Sonic’s first attempt at a true, 3D, proper Sonic game.

Pessimists might point to Sonic’s move into the realms of 3D as his greatest downfall, and whilst it can be argued that the Sonic Adventure games have aged, there’s no denying that back in 1999, the original Sonic Adventure was a hugely successful comeback for the spiky haired, lightning fast, blue hedgehog.

After Sonic’s long absence, Sega fans finally had their hands on a real next generation Sonic game and it marked the hedgehog’s first foray into the third dimension, a move that was, initially, rather successful, despite its flaws.

Unfortunately, playing as the other characters (particularly Big the Cat) offers average gameplay, but Sonic’s levels still stand up to the test of time. Who can forget starting up the game and zipping through Emerald Coast, the first stage, running down a bridge from an incoming shark? Or flying through Windy Valley, climbing up a tornado? Sure, Sonic Adventure has aged, but it still has some great, standout moments for the Sonic franchise and, as always, the music also rocks.

Fans often argue over whether the first or second Sonic Adventure is better. Both manage to capture the classic Sonic feel of the Mega Drive/Genesis originals, but mix it with other gameplay styles and allow you (or rather force you) to play as Sonic’s various friends. Sonic Adventure has the torturous Big the Cat fishing levels, but then Sonic Adventure 2 forces you to play in slow robotic suits and increases the number of the boring exploration, find three crystals levels (it’s a knuckles and Rouge thang). Personally, my vote goes for the first Sonic Adventure.