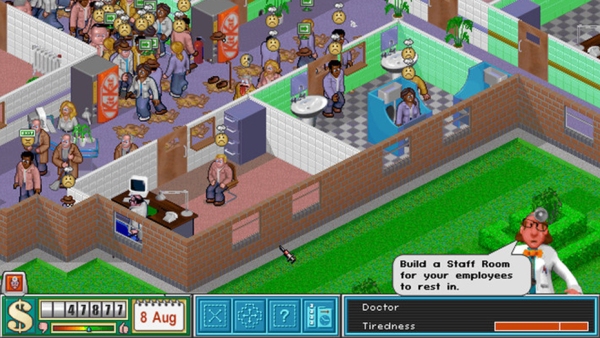 Like its predecessor, Theme Hospital is a deep and hugely enjoyable, wacky, Simulation/Strategy game. This time, instead of running your own theme park business, you’re tasked with running your own hospital. If you think this is going to be boring, then you are wrong, thanks largely to Bullfrog’s hilarious, imaginative and dark use of humour throughout the game.

You’re going to be building your reception area, GP offices, general diagnosis rooms, pharmacies, wards and different surgery rooms. You’re also going to need toilets, staff rooms and, of course, the staff to run the hospital. Patients will come with a number of health problems, such as a the rampant ‘bloaty head’ syndrome.

If you suck at running your hospital, it will eventually be shut down, especially if you end up killing off too many people (you can do this on purpose, if you wish. You know, just for shits and giggles). If you kick ass though and heal enough people (and thus, earn enough money, because healthcare is a business, remember) you will then be asked to progress to the next level, to take over a new hospital, with more challenges and rewards.

I don’t think it quite matched the amazingness of Theme Park, but it still offers a unique, fun and addictive experience for those who give it a chance. Avoid the PS1 version and pick up the game for PC. If, you want to play the game on your tablet, you can do so by downloading CorsixTH for free from the Play Store, which acts as an emulator for the game’s engine. Then just transfer the program files from your PC to the tablet and you’re good to go (instructions here: Click).