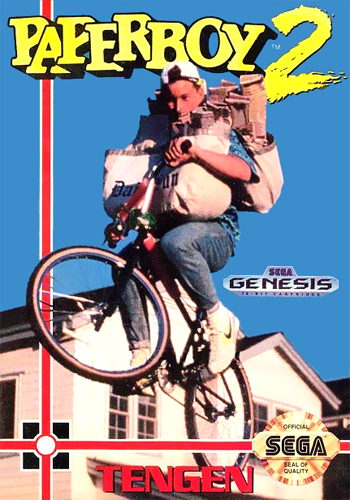 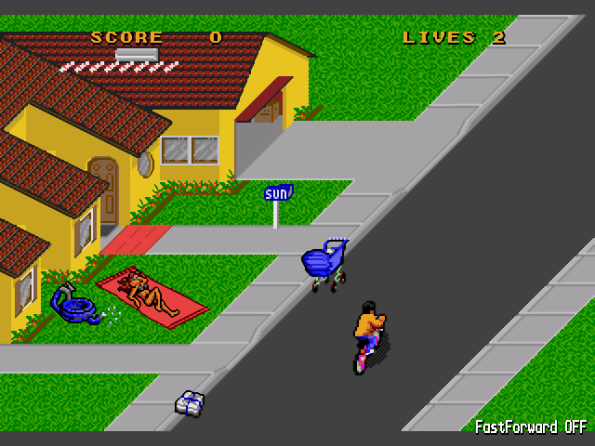 There are a few games that really standout to me, when I think about the first few games I played as a kid and turned me into the video game loving nerd and “man child” (the wife’s words, not mine) I am today. Paperboy 2 is perhaps the very first game I played that applies to this description.

Remember when video games were just fun? Remember when developers used to sit around, thinking “what’s the craziest most mundane activity we can try and turn into a bizarre video game?”, instead of today’s developers that sit around, thinking “should we rip off GTA or COD? And what micro-transactions and DLC should we create?”? Yeah, those were good times and gave us some great games. Paperboy is one of those games.

Paperboy doesn’t sound fun (I’ve never been one, but my friend was and he used to pay me to help him on his round – it was boring, monotonous and mundane), but it really is and the second game in the series was the one I personally grew up on.

Paperboy 2 is very similar to its predecessor. There’s a few minor improvements and you can now choose to play as a ‘papergirl’, but otherwise the gameplay is largely similar. There’s also a two player mode, although I believe the first game may have had this as well.

The gameplay is simple, but addictive .You ride on your bike up a linear street, with the aim of the game being to rack up as many points as possible, by throwing newspapers into house’s post boxes. If you miss any subscriber’s post boxes, the you will lose them as a subscriber. You must get the paper to land into the post box too, otherwise it won’t count. If you damage their property or hit the subscribers in the face, you lose even more points. If you manage to deliver all of the papers to your subscribers though, you will be rewarded with some new subscribers.

What makes Paperboy 2 so fun though, is all of the hilarious obstacles to avoid, like fire breathing gargoyles, stray tyres rolling towards you, men delivering glass windows by walking across the road and skateboarding kids (to name a few). In addition to these obstacles, there are also some obstacles you need to look out for to gain extra points. For example, you could save a runaway baby or stop a ghost (all by hitting them with your newspaper, no less)

Finally, once you have successfully made your way through the street without dying, you will reach an obstacle course, with the opportunity for you to rack up a tonne of points. Throughout the course, there will be targets for you to hit, which all result in receiving some points. There are different paths you can choose, some of them having more targets than others.