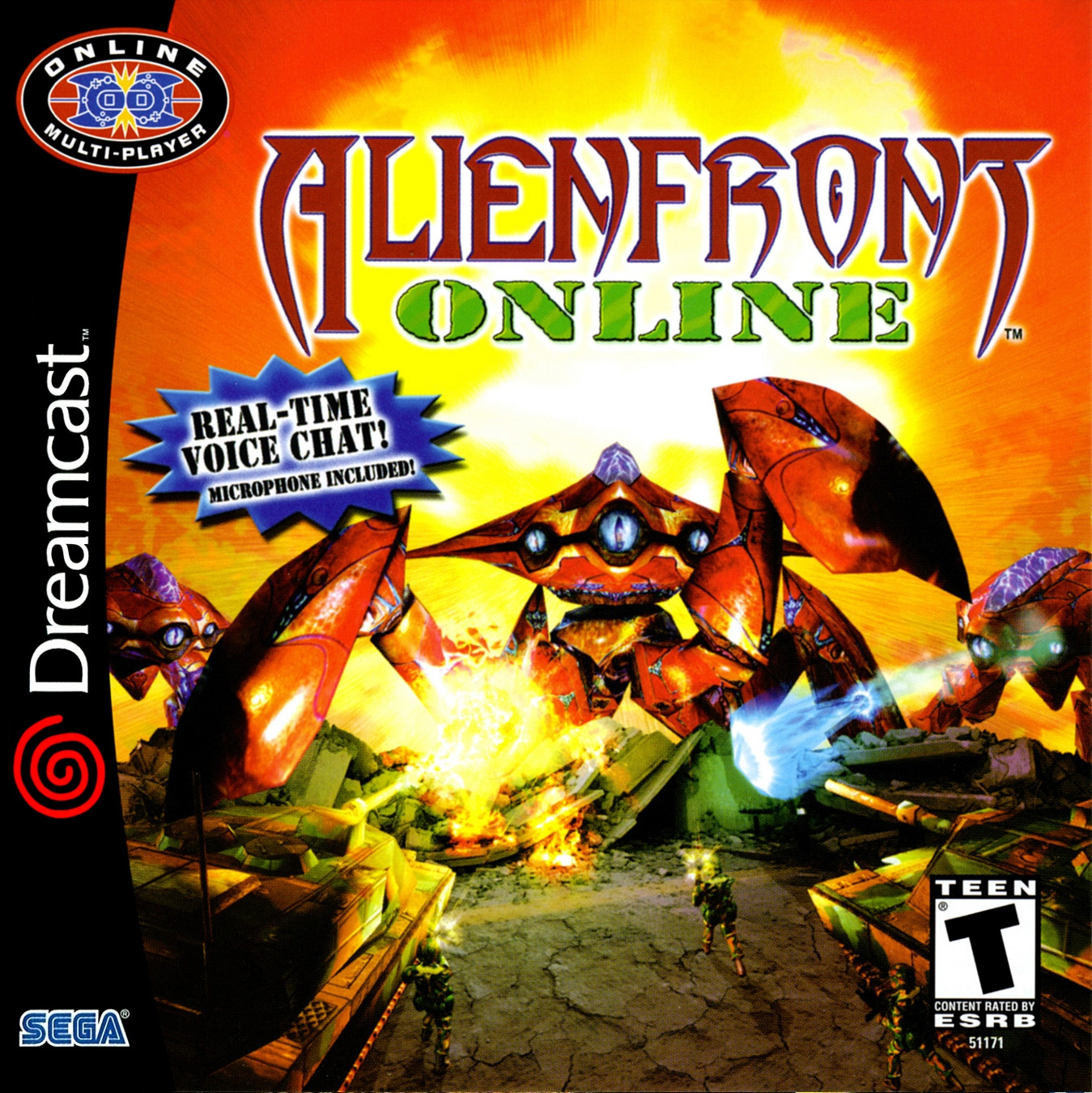 Alien Front Online for me is one of the Dreamcast’s hidden gems. Just from the title, I’m sure you can guess what it’s is all about. Basically, it involves an alien invasion and the consequent fight between humans and aliens. Whilst this concept lacks originality, where the game does score points for originality is that you have the ability to decide which side you choose, the aliens or the army. AFO did achieve some success in North America, but it was released late into the Dreamcast’s life and the European release was unfortunately cancelled. This is a shame, since it’s a lot of fun to play and is definitely worth importing. It is however important to note that this game was created purely with online gameplay in mind, but don’t let this put you off, as it’s still a great game when played in the single player mode.

This game has three basic modes to choose from. These are the online mode, the mission mode, and the arcade mode. This brings me to my first criticism of AFO; there is no offline multiplayer mode. This is a lazy oversight by the developers, and since the servers were shut down not long after the game was released, this left many people like myself with only the single player game to be played.

AFO puts you right in the middle of an alien invasion, and does so very convincingly. You can choose to be part of the alien team, controlling alien vehicles, or the army, controlling tanks. There are different weapons and upgrades available depending on which side you chose. Like I said in the previous paragraph, there is no multiplayer mode available, unless you can find a way to play this online (and some gamers are trying to get it back online). So that leaves you with the single player mode, but believe me, there’s plenty here to keep you occupied.

The arcade mode plays like a simple shooting game. Basically it’s your job to kill the other side. You have a time limit, but like arcade games as you progress through the game you get time extensions. This is a lot of fun and whilst lacks depth, it is fairly addictive like a lot of arcade style games. My only criticism of this play mode is that there are only 3 different stages available and the game simply cycles through them continuously until you die. Coupled with the lack of depth, the lack of stages leaves little to keep you playing on a long term basis. That said it’s still fun to come back to and play every so often, like all good arcade games. Whilst also there are only 3 stages, all are really nice levels, with some great design. The Tokyo stage is my particular favourite.

The tactics mode is what will keep you playing for a long time. Not only are there a lot of missions (60, to be exact) and branching story paths to keep you playing, but it’s also incredibly hard. It’s worth warning that it will cause you a lot of frustration, but the game isn’t impossible. During the mission mode there are a lot more stages than in the arcade mode too. Since I have yet to finish the tactics mode (it really is hard!), I wonder if it’s possible to unlock more stages for the arcade mode, but I don’t think it’s possible. The arcade mode is always good for quick no strings attached fun and frills. No need to worry about a story or anything else, but the tactics mode is always there if you want some added depth.

The most innovative thing about this game was always the online mode and that this was the first console game to allow chat via a microphone online. The Dreamcast was always ahead of its time proving to be a true innovator, but technology has obviously moved ahead since this game was released. So how relevant is Alien Front Online today? Well it may not be the most original game ever and online games may have since improved, but this is still a worthy game to own. The graphics, whilst not ground breaking, are really nice. They are fairly simple, but the attention to detail and effects are really nice. On the surface they seem simple, but when you get closer to the scenery and explosives are being fired you really see a lot of detail.

AFO is incredibly cheap; I managed to purchase a brand new sealed copy from Ebay just over a year ago for £9.99 including postage. The game also comes with an official Dreamcast microphone included and since the microphone is normally sold for between £5-10 anyways, this is a great deal. Although the microphone is now pretty useless with this game (there are rumblings on the internet of gamers trying to get this game back online, but whether voice chat will work, is anyone’s guess), it can be used with other games such as Seaman.