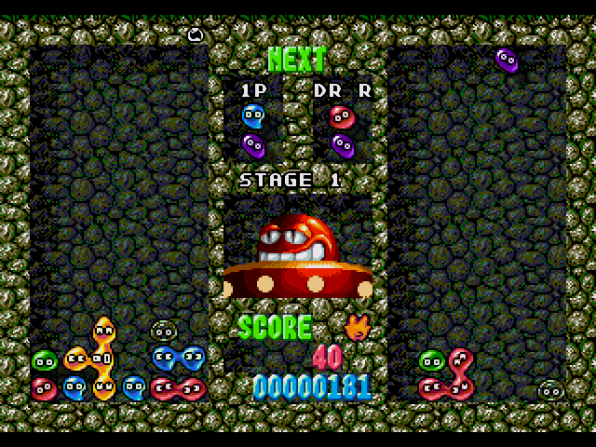 Dr Robotnik’s Mean Bean Machine is one of the first puzzle games I owned and one of the first puzzle games I ever loved and I mean, truly, loved. I’m sure 99% of it was down to the use of the Sonic the Hedgehog licence. When I was a kid, I hadn’t heard of Puyo Puyo (I now love the series) and it’s not surprising since the first game in the series to be released in the West was this – The game they removed Puyo Puyo from the title and slapped the Sonic licence on for… well I don’t really know why. I guess because they thought it was the only reason it would sell. Oh well.

What I also found interesting about this game, in addition to the complete lack of Sonic himself, is the fact it’s actually based on, and stars characters from, The Adventures of Sonic the Hedgehog television series from the 90s. I loved that show, admittedly not as much as Sonic SatAM, but still quite a lot.

The game itself is pretty simple. It has a 2 player mode (yay) and it’s addictive (yay), colourful (yay) and it’s fun (yay). What I like about this puzzle game, is you’re up against an opponent (controlled by the computer, unless you’re playing multiplayer). It makes the game feel more competitive and tense. I like it.

So, basically, two coloured beans drop down your side of the screen together and you need to try and join four beans of the same colour together, whether it be in a  horizontal or vertical line, or in an L or T shape. The only shape that doesn’t work is diagonal lines. If you do this, the beans disappear and any ‘rocks’ (grey beans) that are adjacent, will also disappear. If after successfully completing and getting rid of a set of beans, it causes more beans to fall into a set, then that kickstarts a combo. Do enough combos and it sends ‘rocks’ (grey beans) to be dumped on your opponents screen. If your screen fills up, then you lose.

There’s not really much to say. The story mode is brutally difficult and I’ve never completed it, but regardless, it’s a really fun and addictive puzzle game and one of my favourites.