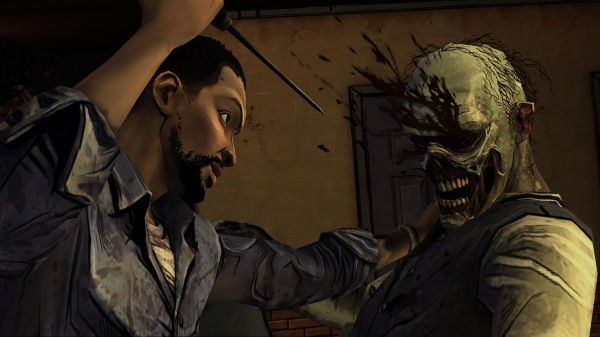 Back in the 80s and 90s, the Point and Click Adventure genre was huge. Then games moved on and the genre just kinda died out, or rather lay dormant, waiting for a publisher to develop and advance the genre in such a way, that it would succeed in the current generation of consoles.

Cue The Walking Dead (Season 1), the hugely successful Graphic Adventure game created by Telltale Games, based on the popular graphic novel, but with a mostly all new, original cast and storyline (I think – I’ve only read a few of the Walking Dead comics and one episode of the TV show). This was originally released it as an episodic drama adventure game, but I played it all in one go (and boy am I glad I did, because the cliffhangers and consequent wait between episodes is brutal).

Back in 2012, Telltale made a pretty big impact when they released this revolutionary title. Upon starting the game, players are informed their actions will impact on the game’s direction and it’s this playstyle that helped make Telltale’s Walking Dead one of the most engaging and compelling games of all time. Now, keeping it spoiler free, there has been a small amount of backlash levied at not just this game, but Telltale and the ‘interactive movie/adventure’ genre in general. You see, whilst the game does provide choice to the gamer and you can choose what your character says in dialogue interactions, multiple playthroughs tend to reveal that it’s merely offering what some have coined ‘the illusion of choice’. Some may argue that your choices ultimately don’t really matter and although I would have to disagree (they shape your character, your world, how people react to you and shape how events unfold), there is no denying that whatever you do, the game will end in much the same way and the story will continue down a narrow passage. Nevertheless, what makes Telltale’s games stand out is the writing for me.

Never before this game had I ever felt so captivated and emotionally tied to a set of characters before. The story and the strenuous relationships between characters, the desperate strive for survival is all depicted beautifully. You play as Lee, a convicted murderer, with the adventure beginning in the back of a police car. You choose how you want to interact with the policeman driving the vehicle. It’s during this interaction you find out more about Lee (why is he in a police car? Did he really kill someone?), but it’s also where you start shaping your character. Is Lee apathetic? Is he a good man, in the wrong place at the wrong time? Is he angry? Aggressive? You choose. Before you know it though, everything goes to shit and you find yourself in the middle of a zombie apocalypse, trying to survive. You first meet up with an innocent young girl, called Clementine. Before you know it, you join up with larger groups, meet people along the way and others die along the way. The one remaining figure throughout (although there are potentially many) is Clementine and the emotional link between her and Lee and how their relationship develops is the strongest part of the Walking Dead (much like Joel and Ellie in The Last of Us).

What makes the Walking Dead so compelling, is no one is really good and no one is really bad. Sure, there are ‘bad’ people, but ultimately, aren’t they just trying to survive like everyone else? People go crazy when stuff like this happens. When you make choices, very few (if any at all) are clear cut good or bad choices. Rather, everything is shades of grey and you’re constantly questioning whether you made the right decision and what impact it will have on your journey.

Overall, The Walking Dead is a game that is truly special. I can safely say that this game changed the industry. Without this, there would be no Until Dawn, no Life is Strange and David Cage wouldn’t be taking notes to draw inspiration from Telltale for his next game either (I can’t imagine he isn’t). It’s true that it does not matter how you play, regardless of the player, The Walking Dead starts the same and ends the same for everyone. But, by allowing players the option to take ownership over the adventure and craft relationships between characters, as well as making choices that shape the story, The Walking Dead engages its audience in a way that no other game ever did before it. The story is heart wrenching and incredible. No one should miss the opportunity to play through this game.