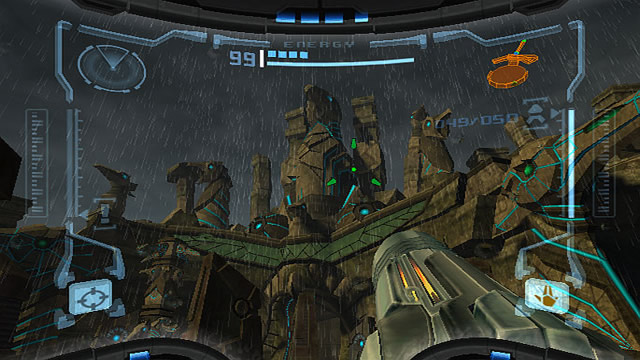 If someone was to ask me what I thought, objectively speaking, was the most impressive and glorious, revolutionary GameCube game of all time, I would probably have to say Metroid Prime. Resident Evil 4 and The Legend of Zelda: Wind Waker would come close, sure, but they were more of an evolution of groundwork that was already laid down in the previous generation. Yes, I know Resident Evil 4 made some drastic changes and for better or worse, moved the game down a more action-oriented path, but Metroid Prime was just something else and best of all, it was exclusive to the Gamecube.

Everything about Metroid Prime was nearly perfect back in 2002. The graphics, sound, direction and production values were absolutely out of this world. I remember during that generation of consoles that it was recognised universally that Microsoft’s XBox outperformed and outpowered both the GameCube and PS2, but Metroid Prime ,without a shadow of a doubt, gave Microsoft a run for its money. And it’s better than Halo, there I said it. But being fair, although it looks like a FPS, Metroid Prime really isn’t one. In fact, it has more in common with Zelda than Halo.

Nintendo had proved that they were the masters of transferring their IPs into the third-dimension, whilst many other companies floundered. However, whilst Zelda and Mario made an appearance on the N64, Metroid fans had a long wait for Metroid Prime, which finally came out on the GameCube, but boy was it worth it.

The funny thing is, not everyone really saw this one coming. First off, Nintendo outsourced development to another developer, Retro Studios, a company who, at that stage, had yet to even develop a game (they were founded in the late 90s). Secondly, people were used to Metroid being a 2D, side-scrolling platform/adventure game. Would it really work in 3D and as a First-Person Shooter? Well, obviously, the answer is yes. Yes it did. But before its release people were skeptical and they had every right to be.

Fortunately, Retro Studios handled the Metroid IP with as much care and pride as Nintendo would. Metroid Prime is one hell of an adventure for Samus and it’s frankly one of the greatest games of all time. The sparse, beautiful world and environments, the intricate level design, the opportunities given to players to explore, the back tracking (we don’t care in Metroid), the lack of hand-holding, the various power-ups and weapons, the morph ball, the brilliant boss battles. It’s all here. Everything you would expect from a fantastic Metroid title is found in Metroid Prime, but for the first time ever, you have a 3D environment to explore and the sci-fi world is amazing.

Those looking to play this gem should be aware that The Metroid Prime Trilogy pack on Wii (you can download it from the eShop on Wii U too) is one of the greatest packages of all time. Metroid Prime 1 and 2 have had some minor graphical touch ups (although bizarrely there’s a couple of missing textures), have been changed to a 16:9 widescreen format and have incorporated the Wii’s motion controls, which actually work really well with the games. I’d even go as far as thinking I may actually prefer the motion controls. Metroid Prime 3 also comes on the disc, which of course, was made for the Wii anyways. If you don’t have a GameCube (and even if you do), playing it on the Wii U via the eShop is probably the best way to go.

I haven’t played much of Metroid Prime 2 or 2, but the first is undoubtedly one of the greatest Nintendo games ever.