Then WWF just got bigger and bigger and killed off all their competition. So what were publishers to do? Well, Acclaim went on to make some crappy Legends of Wrestling games featuring, you guessed it, legends that they somehow obtained the licences for. EA, on the other hand, were stuck. So what did they do? The only logical thing they could do. They took a bunch of hip hop artists and stuck them in a wrestling game. No, wait? What? Ok, that sounds fucking awful, but to the surprise of everyone, the games were actually awesome, especially this gem. How did that happen? Well, EA had acquired AKI (the legends responsible for WCW NWO Revenge, WWF No Mercy etc.).

The First Def Jam game was a basic wrestling game, but they produced a real classic when they took things to the next level with Def Jam Fight for NY. They got rid of the silly wrestling stuff, which didn’t work too well with hip hop artists and the gangster setting and instead concentrated on bar fights and street fighting. 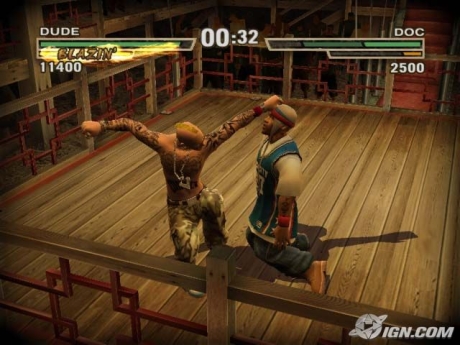 Fight for NY has so much to keep you playing . For a start, you can choose how you want to fight. There’s wrestlers, martial artists, submission specialists, kickboxers and street fighters. You can choose two different styles for your created wrestler, giving yourself a diverse moveset. In addition to traditional punching, kicking and pulling off moves, you can also use the environments to your advantage, by smashing your opponents into the different objects and walls. You can even push them into an oncoming train when you’re fighting in the subway. There’s also tons of weapons to make use of. What I love, is the game is absolutely brutal, with fighters often smashing their opponents head first into brick walls, smashing bottles right over their heads etc. and there’s plenty of blood and bruises to cause on your opponent.

Gameplay is a lot like AKI’s other games, featuring strong and weak punches, kicks and moves, as well as finishing moves, which are just ridiculously over the top. They’re really insane and almost cartoony, but they look brutal and awesome at the same time. Essentially, you want to beat up your opponent and knock them out.

Without a shadow of a doubt, the best mode in Fight For NY is the exceptional Story Mode. The story mode is the usual silly gangster shit, but it’s lots of fun to follow. It doesn’t pretend to be anything deep and it’s great to make your way through the game, watching the stories of two rival gangs unfold, as you fight your way up the ranks. You create your own character, choose his voice and customise his whole moveset and appearance. As you go through the game, you earn more experience points and money and can make your character better and better. It’s mostly linear, but there’s a few choices you can make, such as which chick you want to pick up as your girlfriend.

Like wrestling games, there’s lots of different match types to choose from and most of them are fantastic. There’s everything from standard one-on-one matches, team matches, free for alls, window matches (chuck your opponent through a window), subway matches (chuck your opponent into an oncoming train), Demolition matches (use your opponent to destroy their car), Inferno matches (fight surrounded by fire), cage matches and ring out matches. There’s also different custom rules you can add, like submission rules.

Fight For NY is one of the most unique and interesting fighting/wrestling games I have ever played. It is neither a wrestling game or a fighting game, it’s a bizarre mixture of fighting and wrestling and it works just beautifully.