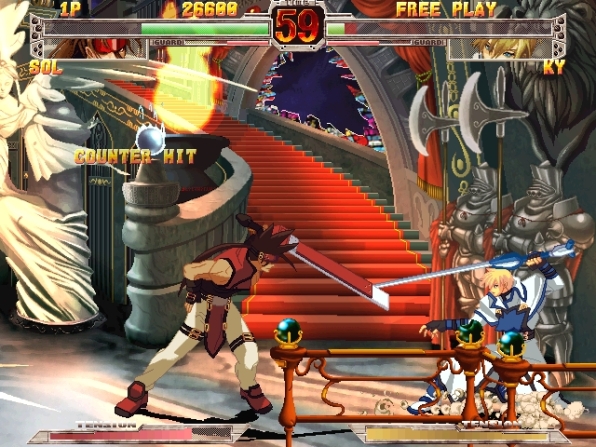 As gorgeous as Capcom and SNK’s 2D fighters are on the Dreamcast, Ark System Works win the prize for most visually stunning 2D fighter on the system (can’t speak for the other console versions, by the way, I’ve only played the Dreamcast version), thanks to Guilty Gear X’s beautiful large characters and detailed backgrounds.

Seriously, stick Guilty Gear X in your Dreamcast, output to a HD TV with the use of a VGA cable and watch your jaw drop to the floor. Capcom’s fighters, whilst fantastic and graphically nice, just can’t rival the pristine look of Guilty Gear X. You see, Capcom’s fighters output at a relatively low-resolution, so despite being compatible, technically speaking, with the VGA cable, which outputs at a 640×480 resolution, it actually looks pretty ugly. Guilty Gear X takes full advantage of VGA, supporting amazing high resolution graphics. Even when in motion, the animation is still smooth and crisp, making Guilty Gear X one of the most beautiful 2D games on the Dreamcast.

In terms of its gameplay, Guilty Gear X plays like a lot of fighting games, with all the usual modes, combos and special moves. Guilty Gear X isn’t all style and no substance, as the gameplay is actually really awesome. It’s actually different enough from the rival Capcom fighting games on the Dreamcast, that it stands out for its gameplay, as well as its gorgeous appearance.

In terms of gameplay options, there isn’t a great deal to add longevity. It has all the ‘normal’ modes, such as Arcade and multiplayer options, but it has plenty of style, looks fantastic and the gameplay mechanics have enough depth to keep you playing and learning character traits and moves for a while.