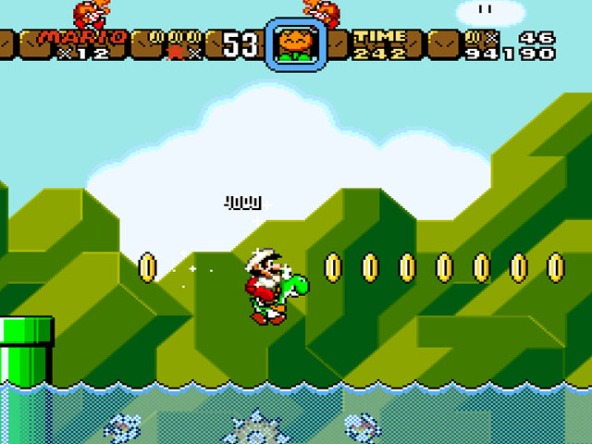 Super Mario World is the game I remember thinking “fuck that, I have a Mega Drive and Sonic the Hedgehog. Genesis does what Nintendon’t!” about when I was a kid, but actually, I secretly thought it was a pretty awesome game whenever I got a chance to play it. That was back in the 90s. Eventually, I finally bought a SNES back in either 2010 or 2011 (I can’t remember which) and, of course, I made sure I got Super Mario World with it and what a game it is.

Despite not being the massive improvement Super Mario Bros. 3 was to the series, Super Mario World is still one of the greatest games of all time and it’s all down to Nintendo’s superb level design.

From the moment the game begins to the ending credits, the game is astonishing, with beautiful and well crafted worlds. There are new moves and Super Mario World also gave us the début of the greatest character in Mario history, Yoshi, which adds a tremendous amount of depth to the gameplay. No, I’m serious. Don’t go underestimating the amazingness that is the Yoshi power up. There’s also the cape power-up, which is also new.

So overall, Super Mario World may essentially be just ‘more of the same’, but it doesn’t stop it from being any less great. When it comes down to the gameplay (and music, actually), Super Mario World features some of Mario’s absolute, very best.