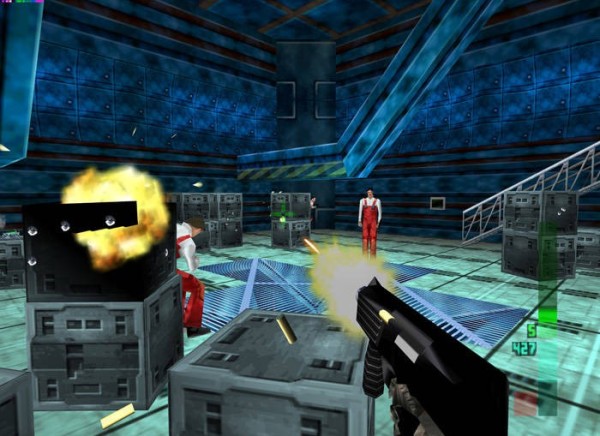 Gamers were expecting big things from Rare with their spiritual sequel to GoldenEye 007 on the N64. Rare may have lost (or let go of?) the James Bond licence, but that didn’t stop them working on a kick ass new shooter, utilising the same mechanics and engine.

With Perfect Dark, Rare took everything that had made GoldenEye great, and improved it, refined it and added as much content as they physically could. In fact, the game was years ahead of its time, pushing the N64 hardware to the limits (those of you who have experienced the times the frame rate dips to 3 frames per second will attest to this), even when utilising the expansion pack. More weapons? More levels? More multiplayer modes? More single player modes? More blood? More graphical effects? Widescreen mode? Ability to disarm enemies? Higher resolution? Bots (known as ‘simulants’) for additional opponents in multiplayer? Yup, Perfect Dark has all of this content.

After the huge success of the multiplayer in GoldenEye (a mode that was initially an afterthought), unsurprisingly, Rare focussed their efforts far more on this side of the game. One of my favourite additions though, was that you could play the Story Mode in multiplayer through two awesome, innovative modes: Co-operative and Counter-operative. The Co-operative mode meant that 2 players could play through the Story Mode together, a most welcome addition, as my friends and I used to take it in turns with missions on GoldenEye and watch each other. The Counter-operative mode was really fun though. In that mode, one player would be in control of a random enemy who must stop Joanna (the other player) from completing the mission. The game does not give any indication which enemy is the one controlled by the player and if the human-controlled guard is killed, the game continues with the Counter-operative player taking control of a different enemy in the level.

The competitive, multiplayer games are a lot of fun too. The addition of computer controlled bots means it’s possible for gamers to practice in single player and it also means you can have bigger matches with more people when playing with friends. There’s different match types, all of which are fun, like the standard Deathmatches, King of the Hill, Capture the Flag, Hold the Briefcase etc. It’s these modes where I spent most of my time playing the game, even when I wasn’t with friends. I personally really enjoyed the ‘challenge’ mode, where you played through multiplayer matches with different stipulations.

The Story Mode played similarly to GoldenEye, in the sense that it is mission-based, there’s no checkpoints (boo!) and there’s the 3 difficulty levels, with harder difficulty levels adding more missions. It’s been over 10 years since I’ve played the mode, so forgive my abysmal memory. I did recently replay the first two missions, but that’s it.

Perfect Dark shows its age now, with the stuttering framerate when too many enemies are on screen or there are large explosions, as well as the old-fashioned story missions, but it was also vastly ahead of its time. Perfect Dark had some really cool effects and mechanics, like the ability to disarm enemies and other players, the fact dead bodies didn’t instantly disappear and the cool blood effects. For example, if you shoot a guard in the foot, they will hop and a trail of blood will be left in their path. You can also continue shooting dead bodies and watch the blood flow out, forming a larger pool. There was also the Laptop Gun, which could be mounted to any wall you like, to become an automated turret gun that will shoot enemies on sight.

So here’s the thing. Perfect Dark on the N64 is still brilliant, but at least now you can play it in high-definition, 60 frames  per second on Xbox 360 and Xbox One. Those versions also have everything (or nearly everything) unlocked from the start and also offer maps and weapons from GoldenEye, so it’s a great version of the game and well worth buying.